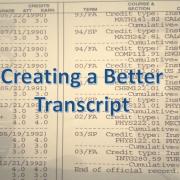 I’ll have to give Salman Khan credit for this particular idea.  In 2012, Sal was chosen as one of Time Magazines 100 most influential people of the year. In the Time.com, April 16th article by Eliana Dockterman, Shaping the Future-See TIME 100 Honorees’ Predictions for the Future, Khan was quoted as saying: “Right now, transcripts have some statistics on your grades and maybe some standardized test scores. But in the future, they should include a portfolio of things you’ve created—­robots you’ve built, programs you’ve written, things you’ve painted, whatever—along with what your peers and your community think of you as a leader, a communicator and an empathizer. This is already what people care about, but it hasn’t been formally recognized.” – Salman Khan, Executive Director of the Khan Academy (TIME 100 2012).

This struck me as a perfect idea, one that is especially appropriate for members of our dyslexic community whose, strengths, skills and talents aren’t necessarily highlighted by the traditional high school or college transcript, as the qualities they possess are not often assigned a numerical value.

Sure, traditional school evaluations and standardized assessments generate numbers which reveal strengths in subject areas based on one’s ability to ace these particular tests.  But for those individuals who struggle with standardized testing, the transcript may not be a true predictor of their strengths, how they function as part of a team, whether they think outside the box, and show problem solving abilities, which are many of the skills that employers look for in employees.  When employers and college admissions counselors rely heavily on numbers in isolation as part of the selection process, they may be missing out on some of the most brightest and innovative minds.

The idea of creating a better transcript, an alternative transcript, as a way to express an individual’s strengths is appealing. It makes great sense, and would be a way to set one’s self apart from the pack.  The alternative transcript would create a positive narrative and profile of strengths of what the individual has created, written, and demonstrated in the community. This would be more visible and tangible, instead of just numbers on paper.

The Video Portfolio or Interview:

The use of video portfolios and interviews as part of the application and interview process for schools and the workplace is also appealing.  If employers took the time to accept video submissions from individuals discussing the skills that they possess or if they granted brief video interviews through Skype, Google Hangouts or other platforms, they might discover great some great potential. The idea of looking "beyond the numbers" is important here.

The concept of the video interview reminds me of the 2013 film The Internship, starring Vince Vaughn and Owen Wilson.  On the IMDB website, the film is summarized as follows - “Two salesmen whose careers have been torpedoed by the digital age find their way into a coveted internship at Google, where they must compete with a group of young, tech-savvy geniuses for a shot at employment.”  I related to this scenario myself in my own life, as a mid-50’s tech-challenged female recently hired as a Social Media Manager for Headstrong Nation.  In The Internship, Vaughn and Wilson participate in a Google Hangouts video interview prior to being accepted as interns at Google.  Here's a clip of their interview from The Internship below.  In the film, the characters "made the cut" after their interview, and were later offered full-time positions at Google.  The message here... There's hope for us all!

In real life, Vince Vaughn identifies himself as a man with dyslexia/ADHD and credits his success as an actor to his struggles with his learning disabilities. You can read more about Vince’s story at the University of Michigan’s Dyslexia Help website.

I got to thinking about what my alternative transcript might look like. What have I created that I am proud of?  What talents do I possess? What character traits do I have which might be valuable? I decided that I'm going to take some time to think on this, create my own alternative transcript, and share it next month on the Headstrong Nation Blog.

How about you?  What would your alternative transcript look like?  Remember, you are more than just a set of numbers. Take some time to create your "better" transcript and share it with us!  Although we may not be able to feature all submissions, we would love to share as many as we can on our blog or on our Facebook page and in our Twitter feed, @headstrongnatio.

If you are interested in sharing, please send your submission to info@headstrongnation.org.  We're looking forward to experiencing what you’ve created!  Show your stuff!