Light at the end of the tunnel

Tracy Johnson is an accomplished speaker, educator, advocate, counselor, and minister who is also dyslexic.

Tracy's story is an inspirational one for me personally.   Early in my Journey with Dyslexia as a parent of a struggling child and as an adult with dyscalculia, I came upon a community listing for a screening of the acclaimed HBO documentary film, Journey into Dyslexia, Great Minds Think Differently, directed by Academy Award winning Directors, Susan and Alan Raymond (2011).  I attended the screening and the film touched me deeply. There was not a “dry eye” in the place. Susan and Alan Raymond’s excellent directing and interviewing skills drew heartfelt stories from all characters interviewed in the film. Tracy Johnson was one of the individuals interviewed in the film that shared her journey. I’ve since gotten to know Tracy on a personal level and I consider her to be the “Real deal” She’s a passionate woman on a mission to spread the word about dyslexia awareness through giving back to others as a leader in the dyslexic community. Our early individual journeys or those with our children who struggle with dyslexia may be quite painful, and it’s often difficult to see the light at the end of the tunnel.

Tracy speaking at the African American Museum in Phila, PA

Dyslexia: A Civil Rights Issue of Our Time

In the documentary, Tracy shared about growing up as a special education student in the School District of Philadelphia, Pennsylvania.   She was raised by a single mom, and her early experiences in public school were very discouraging. She was daily confronted by a system that focused on her limitations so she did not have a true awareness of her innate potential.   She was often labeled “slow” by teachers and peers.  She endured many painful classroom experiences along with the rest of her special education classmates.  One teacher told her group that none of them had the ability to go to college.  Tracy had first-hand exposure to the low-expectations that often confront poor and minority pupils who struggle with the basic skills of reading, writing, and math.

Deep inside, Tracy had the sense that she had more to offer, that she could do more and be more.   This motivated her to apply to community college, where she was once again told that she was not college material and was turned away.  One college counselor told her to “Give up”.  Discouraged, but not defeated, Tracy obtained a job as a custodian in the Philadelphia School District, cleaning school buildings, and working in the same hallways of the educational institutions that had many times failed her as a student.

After watching a TV sitcom where a character was diagnosed with Dyslexia, Tracy had an epiphany.  She finally had a name to describe what she had been experiencing, “dyslexia”.   It was soon after this time that she obtained a formal diagnosis of Dyslexia as an adult.  Through the help of tutors and mentors along the way she began to learn, thrive and get accepted into college where she received both an Associate’s Degree and a Bachelor of Science Degree with high honors. (Harcum, A.A, Cabrini, B.S.). Tracy didn’t stop there though.  She received her Master’s Degree in Multicultural Education from Eastern University, and at this writing  is now pursuing an additional Master’s Degree in Special Education.

As a graduate student, one of the things that help Tracy with her studies is using her text and her Learning Ally audio books together as she reads.   She has a recording device with her at all times during her lecture classes. She makes a point to sit up front in the classroom.  On the first day of class she introduces herself to her professors and informs them about her dyslexia and how she learns best.  Tracy acknowledges that it may be hard at first to be open and honest about one’s learning differences, but she found in her own experience that being honest and open actually helped her more than hurt her. Tracy uses flashcards to learn new information and she’ll sometimes record her own voice reading her cards and then listen to the recording.  Tracy also finds it helpful to talk to family members, friends, even her dog and cat about the things that she is learning to help her to retain the information. She recommends that students should make a point to open up about their individual learning styles since “No one knows you better than yourself.” Owning your education and communicating your concerns with your teachers will inform and help them to be in a better position to help you when you need support.

Tracy credits her success to her faith, and the support from the many mentors, family and friends who entered her life.  She turned her challenges into victories, overcoming poverty, and realizing her full academic potential. Her journey is a positive one and Tracy gives back to the community as an accomplished lecturer and advocate for individuals with learning disabilities – especially dyslexia.  She is the President and Founder of Vessels of Hope, a mentoring and networking organization for minorities with learning disabilities.  She is an in-demand speaker, who presents in a down to earth way as she discusses her rocky early journey of shame and her initial sense of failure, to her later academic achievement and success as an adult.  Her story continues to inspire many individuals with dyslexia and other learning disabilities, parents, educators, legislators, civic and business leaders.  Her persistence, belief, strong faith and ability to reach out for help, has enabled Tracy to become an agent of change, a true vessel of hope herself for the dyslexic community!  I am honored to know and work with her. 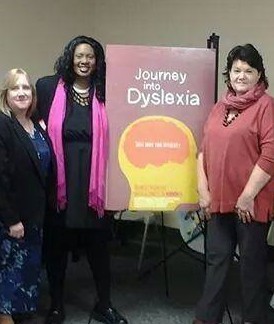 You can read more about Tracy’s work on the Vessels of Hope website and watch her in the documentary Journey into Dyslexia.  Grab a box of tissues. Powerful stuff!  Still gets me every time! My son says I don’t cry as much as I did in the beginning of our journey, though.   That’s because I can see the light at the end of the tunnel.  Thank you, Tracy. 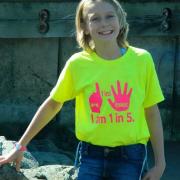 It was not long ago that we introduced you to 11-year old super advocate, Jenna, and her mom, Shannen. Our blog post, Proud Dyslexic & Part Time Snake Handler, spotlighted how Jenna was inspired to create a dyslexia ID card to help assist her in becoming a fierce advocate for herself while at school.  Not only is Jenna inspiring her dyslexic peers, she is also inspiring the adult dyslexic community by speaking openly and embracing her dyslexia publicly.

Jenna strikes again! Not only does Jenna speak openly about her dyslexia, she wears her dyslexia on her sleeve…literally!  As another way to help educate and inspire others about dyslexia, Jenna created these cute iron-on vinyl t-shirt decals.  Shannen, Jenna’s mom says, “She wanted to share her shirt to get others to show their pride because she noticed there were not a lot of good shirts for kids.” Not only does Jenna wear her shirt proudly, she wants all kids to be able to display their pride as well. Jenna possesses a true entrepreneurial spirit and has begun selling these decals within her community.

Headstrong Nation is inspired by Jenna’s tenacity and pride of her dyslexic identity. She has totally embraced our motto of Strength Not Shame and we hope Jenna’s bravery will inspire you all to stand proud of who you are as well.

Thank You, Jenna, for paving the way and becoming an amazing example to us all! 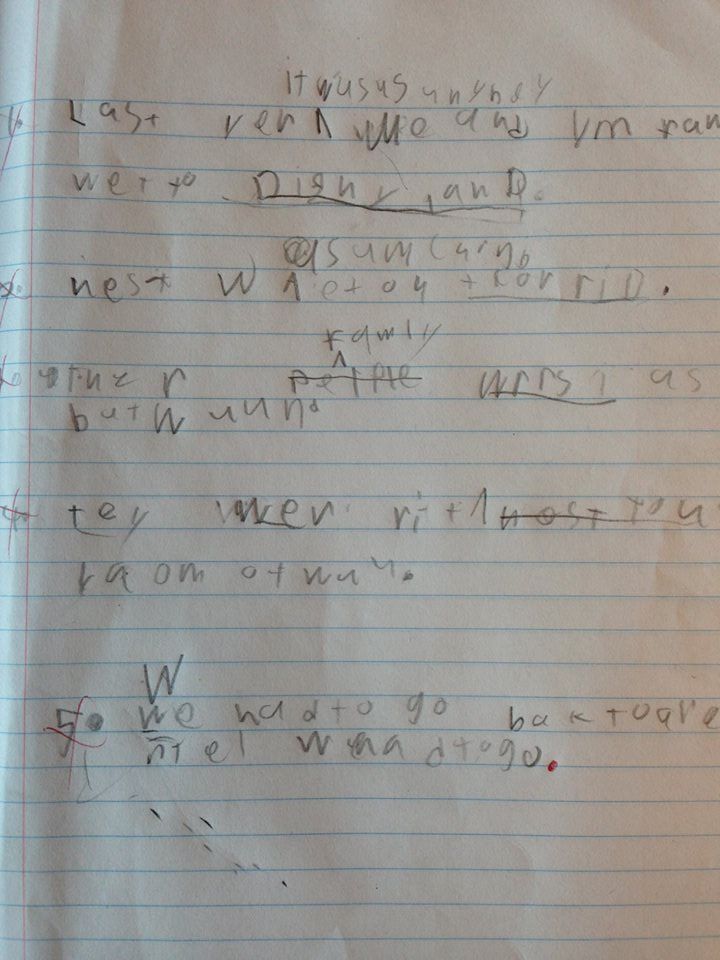 Stacey Cavaglieri volunteers at Headstrong Nation and lives in San Diego with her two dyslexic children and her husband.  As a dyslexic herself she knows very well the journey from struggling student to successful adult.

Chances are when you talk with someone about dyslexia they might say something about seeing backwards. Sadly this misconception could not be further from the truth. Dyslexia is not a vision problem, but a phonological processing issue. What this means is dyslexic people may have difficulty associating letters to the sounds they make. This affects the decoding process of reading, comprehension and fluency.

For many, dyslexia not only affects reading and spelling, but it also impacts the entire writing process.  It is true that many dyslexics may flip letters while reading and writing, but this is caused by how the dyslexic brain is processing the information on the page.

Have you ever wondered what dyslexia looks like? Here is an example of what dyslexia looks like for my seven-year old son Ryan, who was recently identified as dyslexic. Ryan is in second grade and is a bright, energetic, fun-loving kid who loves to make people laugh. Even though eye reading is challenging for Ryan he loves ear reading with his IPad. Outside of school Ryan loves Tae-kwon-do and is a master at all things Minecraft. He is also very passionate about Cub Scouts.

Ryan used to enjoy school; that was until second grade when writing has become the focus.  Ryan has always had trouble with writing. As early as preschool he was showing signs of dyslexia.  He never enjoyed drawing or coloring as a preschooler and learning to write his name was very challenging. As you can see from this picture Ryan is having a tremendous difficulty getting the words out on the page.  Not only is he wrestling with spelling, he is fighting with staying on the line, he is dealing with spacing, punctuation, and capitalization. All of this is happening while he struggles to hold the idea long enough in his mind to get it on the paper. Perhaps it might seem like he is not trying very hard by the type of work he is producing, but as his mom I know just how difficult it was for him to get this on the paper. I know how hard he tried and I am proud.

It is heartbreaking for a parent to see their child hate school and cry but these kids are the bravest, strongest kids I have ever met. Dyslexic kids know where they stand against their peers but they head off to school everyday knowing how painfully challenging it is for them yet they endure. I know that with the proper support Ryan will not just endure, he will reach any goal he sets his mind to. 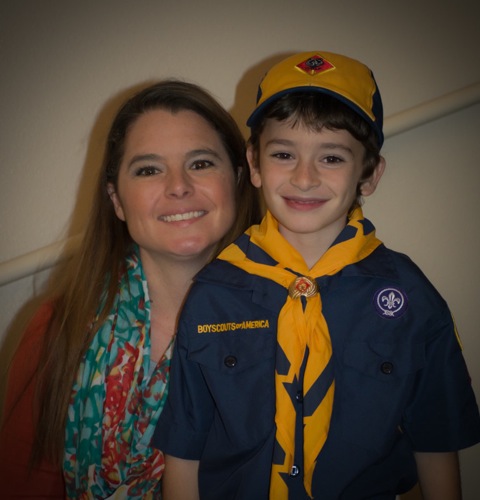 As parents we all experience endless hours of worrying if our children are going to make it.  I am here to tell you with the right support, positive strength based attitude your child will find success. Remember the days are long but the years are fast.  A few keys to success, first find your community, you’re not alone. Second tell your story. Telling your story might be the hardest part, but by far the most beneficial.  If you are a dyslexic parent your story is a critical piece to helping your child accept who they were meant to be. Even if you are not a dyslexic parent, showing your children your own weakness will speak volumes to them. Lastly, providing your child with the right accommodations not only provides a ramp into learning, but also boosts their self-confidence. If we can do these things our children will not only survive but thrive.